A powerful Foreword by famed legal scholar and Supreme Court advocate Erwin Chemerinksy contextualizes the issues and the intersection of public policy and the First Amendment.

“To be ignorant of what occurred before you were born is to remain always a child. For what is the worth of human life, unless it is woven into the life of our ancestors by the records of history?”

“He was just an inexplicable man who had appeared from the mist.”

Chapter 3 – All Rise: The First Trial

“Even while they are tyrannical, they still claim to be humanitarian.  I should regret my taking the risks of coming in the first place.”

“It is dangerous to be right in matters on which the established authorities are wrong.”

The bosses brought a trial to deport him over the sea,
But the judge said, “He’s an honest man, I got to set him free.”
Then they brought another trial to frame him if they can
But right by Harry Bridges stands every working man!

“The law has yet another hold on you.”

“If there is any fixed star in our constitutional constellation, it is that no official, high or petty, can prescribe what shall be orthodox in politics, nationalism, religion, or other matters of opinion or force citizens to confess by word or act their faith therein.  If there are any circumstances which permit an exception, they do not now occur to us.”

“There is a point beyond which even justice becomes unjust.”

“What’s past is prologue.”

“[T]here is, even now, something of ill-omen amongst us. I mean the increasing disregard for law which pervades the country; the growing disposition to substitute the wild and furious passions, in lieu of the sober judgment of the courts; and the worse than savage mobs, for the executive ministers of justice.”

– Abraham Lincoln, 1838, commenting upon the outbreak of mob violence across America.

“Justice is incidental to law and order.” 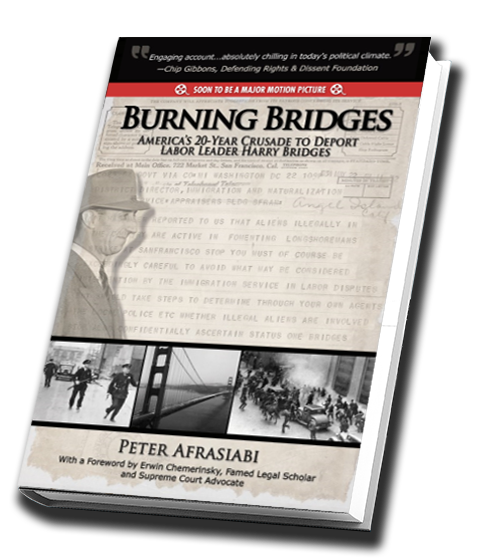